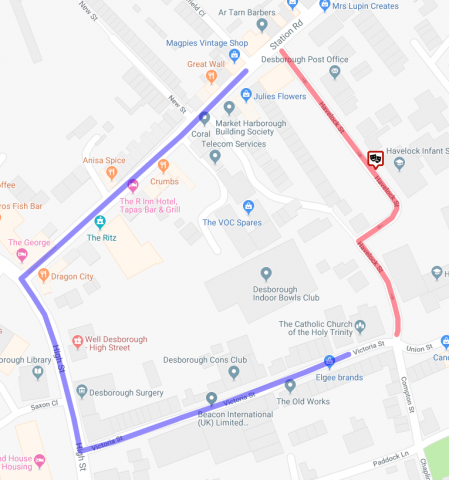 Desborough Town Council’s Honoured Citizen Award is a tribute to members of the community and confers no material honours or special privileges. Awards may be made at any time and will not necessarily be made on an annual or regular basis.

Awards will take the form of an official letter or certificate, and may be presented at an appropriate place such as the recipient’s school or workplace, at an event, at a Town Council meeting, posted to them, or presented in private.

The scheme is intended to celebrate exceptional citizenship but to avoid embarrassment we keep details of nominations and deliberations confidential.

The nomination form is here (in pdf) and here (in word), together with the policy here.

Membership of the Council

Eamon Gilbey has ceased to be a member of Desborough Town Council (DTC) by reason of non-attendance at meetings over a six month period (as outlined by statute). Ordinarily the Town Council would have declared the vacancy and would move to advertise it. This allows any ten electors to requisition a poll (a by-election). If no by-election is called then DTC can seek to co-opt.

However, in the six months prior to the date of an ordinary election (originally scheduled for May 2019) there is no provision for a by-election to be held, so the Council would move straight to co-option.

The six month period referred to above began at the start of November 2018. However the Northamptonshire (Changes to Years of Elections) Order 2018 came into force in January 2019 and the consequence of this was that it moved the election date back twelve months. However, the Order was silent on the impact of this change on the six month rule as outlined above.

This situation affects all Councils named in the Order. Therefore, colleagues at the Borough Council have requested guidance on behalf of all District/Borough Councils (and by implication the Parish/Town Councils in their areas) in the North Northamptonshire area from the Ministry of Housing, Communities and Local Government (MHCLG) which is the Government department responsible for drafting the Order referred to above. Although this was requested in mid-January, no advice has yet been received. Therefore the MHCLG has again been requested as a matter of urgency to outline what course of action should be taken by all affected Councils in Northamptonshire when a vacancy arises.

Until the advice is received from MHCLG, it is unclear whether the vacancy can be filled by election, or must be filled by co-option. Colleagues at KBC have assured DTC that they are pressing MHCLG for an urgent response to this issue so that it is clear what the correct process is and to ensure all such vacancies are filled in accordance with the law.

Please bear with us

We are delighted to be working with a new website provider but not everything was live before the old site switched off.  We are working on this and the site will have more content added in the coming days.

If you sent us any email from Friday 15 February to Tuesday 19 February 2019 and you haven’t had a reply it is possible that we didn’t receive it.  Please send your email again and accept our apologies.

Find out more or adjust your settings.

This website uses cookies so that we can provide you with the best user experience possible. Cookie information is stored in your browser and performs functions such as recognising you when you return to our website and helping our team to understand which sections of the website you find most interesting and useful.

Strictly Necessary Cookie should be enabled at all times so that we can save your preferences for cookie settings.

If you disable this cookie, we will not be able to save your preferences. This means that every time you visit this website you will need to enable or disable cookies again.